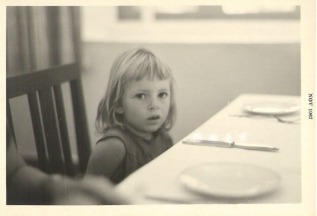 I was born in Nairobi, Kenya in 1963. That's me at the dinner table in Karen.
(I didn't like eating at the table back then but I do now!)

My father was a pilot for East African Airways. A hard and bitter man.

My mother, Beth, was beautiful, gentle and highly intelligent. She had the sense to leave him and head home to Australia.

Her escape changed my life.

I arrived in Sydney with my mother, sister and brother in the winter of 1967. I'd never known winter.
I remember staring out the window at the rain on the wet tarmac, confused. I didn't realise I'd never go back to Africa. Nor did my mother.

It took her the rest of her life to get over the shock. 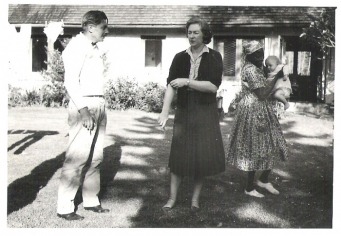 That's me in the arms of my ayah. My mother on the right. And my father on the left.
Very Kenya.
I'm glad I left!

We came to live with my grandmother Alice. She'd planned a nice retirement in a flat in Coogee. That went out the window when Beth and her three children arrived on her doorstep. And Blessed Alice rescued us and took care of us like a second mother until the day she died.

She was my confidante when I was growing up.
We shared a room until I was sixteen when she decided she needed her own space. I loved her with my soul and helped my mother nurse her through the long years when her memory and function left her.
I would do it again gladly for another hour with her.

Alice bought a simple house on a big block in Blacktown.
It had a cottage at the back where she later retired and a forest of gum trees.
It is where I live today, sharing the cottage with my partner and our two cats.
But Alice is here too. And Beth. And with my brother living in our old house I guess I'm proof that family is important. My family, however is not defined by blood or colour, or circumstance or lifestyle.

As you'll see if you've read my work. 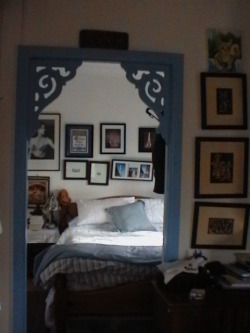 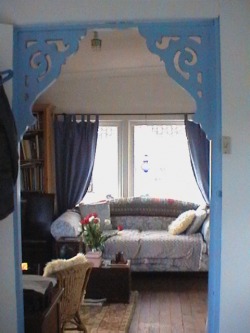 My grandmother's cottage. My home.

I first went to school at Jasper Road Primary School in Baulkham Hills, but six months into Kindergarten we moved to Blacktown and I went to St Michaels Primary. The classrooms were old with wide verandahs, the church was weatherboard and the Presentation Sisters were in charge.
They were strict. Only years later did I realise their harshness came from the harshness of convent life. My Aunt was and is part of the order and I'm pleased that in her retirement she has a relaxed and fun life. Her early years were not so easy! 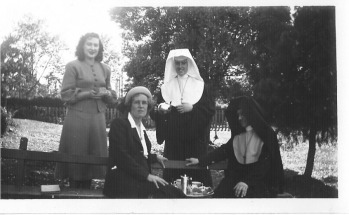 My mother, Beth (standing on the left). My grandmother is seated (left). My Aunt (Chris) is in her novice habit on the right. 1940s
I didn't like primary school. Actually that's an understatement! I was caned regularly for handwriting, spelling, talking, poor mathematical skill! I ran away twice!

High school was a different matter. I went to Nagle Girls High School and to this day I believe it is one of the finest schools in the country. At Nagle I found teachers who cared about the whole person, not just their academic merit. And it was there I met the friends I have all these years later. I loved the school and my teachers and lamented that it only went to Year 10.

I did my Year 11 and 12 at Mitchel High School. It was very different from Nagle and it took me a long time to get used to it. But there were fine teachers there too.

After a brief stint in Sciences at the University of New England I began a teaching degree at what later came to be known as th Australian Catholic University.
I studied English and History and Theology.
I met one of my best friends there. She teaches in Port Macquarie and never fails to make me laugh. 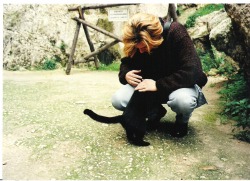 Since 1985 I've been teaching English and History at a girls school in Penrith.
I love teaching. And I love the engagement young people, particularly young women, have with the world. They will be the ones to solve the problems of inequity and global warming. They are strong and resilliant. They don't suffer fools. They have an infinite capacity to love and empathise. They make me laugh. They make me think. They force me to keep reinventing my methods of communication.
And for a writer that is essential.

A bit of time out

Since August 2011 I have been battling breast cancer and its
treatment. It has been a time of thick fog for me, but it's beginning to lift.

I am so grateful for the love and support of my partner,
family, friends, colleagues and students. You have made a huge difference to my
quality of life. 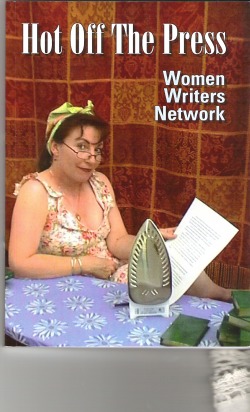 I've been writing all my life, but in 1997, after the sudden death of my mother, Beth (in 1995), I realised I needed to start seriously to see if i could write and be published.

I joined the New South Wales Writer's Centre and, in particular, the Women Writers Network. And it was from that moment i considered myself a writer. Because they have made me one!

I've been the convenor of this merry and talented band of women since 2005.

This is the cover of our first anthology. (My sister is the woman behind the ironing board, She's a good sport!)
Publication History

The Pyramid    2010 Selected as part of Melbourne Midsumma Festival. Three to a Room


Sweet Treats at the CWA

Love or Money or Bar or Bed

Sweet Treats at the CWA

Love or Money or Bar or Bed

Jack (excerpt from The Pyramid)

Observations of a Horse on a Motorway